Eat, Sing, And Be Merry! 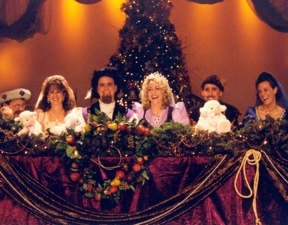 A Christmas Madrigal Dinner Theater is a trip back in time!

Twelve singers dress in 16th century, English costumes and herald in the Christmas season with a harmonious concert of traditional, a-cappella carols. The ten members of the royal court join the King and Queen as they sit on stage in a semi-circle that opens to the audience. The guests are seated at festively decorated tables ready to enjoy a Christmas dinner with all the trimmings: the Wassail, (hot apple cider) the “boar’s head” (prime rib) and Figgie Pudding (bread pudding.) The King’s Jester serves as the “Master of Ceremonies” for the evening, as he delights and surprises the audience with toasts, jokes, and comic asides.

A troupe of the “King’s Players” join the Court and present a traditional play that dates back to the time of Medieval and Renaissance European literature. Shudder as “Death” comes for “Everyman” as in the medieval classic, “The Summoning of Everyman,” then rejoice as Christ alone stands beside him. Marvel at the heart-felt poetry in Cyrano, as he pledges his love to the beautiful Roxanne. Wonder at what it is that women really want most in The Wife of Bath, as the fearful Knight tries desperately to find the answer to save his head. Rejoice with Mak in The Second Shepherd’s Play, when his life is spared by the birth of Jesus, the Child of Peace.

The scenes from these plays have been adapted from the classics and are written entirely in rhyme, all delightfully seasoned with the Christmas message. These scenes are presented throughout the evening, between the courses of the meal, and are followed by the sweet message of Christmas presented in an a-cappella concert of traditional Madrigal carols. The audience comes away from the evening having enjoyed a delicious holiday feast, laughed and cried at the players, marveled at the vocal talent of the ensemble, and drawn closer to Christ.

These Christmas Madrigal Dinner Theaters create an evening at the theater, hosted by your drama ministry. A vibrant theater outreach program serves as a magnet to attract your community to your church campus, where they will (hopefully) return to hear the Good News of Jesus Christ.

All of these plays aim at building the Body of Christ by encouraging Christian family values, healthy relationships, and spiritual growth. You’ll find a wealth of entertainment and spiritual challenge contained in these Christmas Madrigal Dinner Drama Scripts. 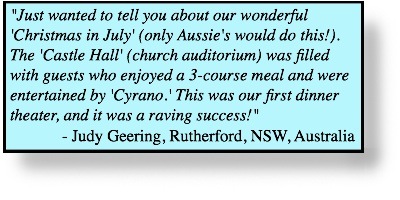 “The Wife of Bath’s Tale”

We know that sometimes you need to see a sample of the script before you buy. We have provided free previews for you. Click on the titles of the free preview files below to download a free file to your computer. Then, return here to purchase the full script.

Click on the title of the script to view a detailed description, or purchase and download the script.

The script WILL NOT be shipped to you.
After purchasing, you will be given a link to download your script instantly.

The DVD will be mailed to you.